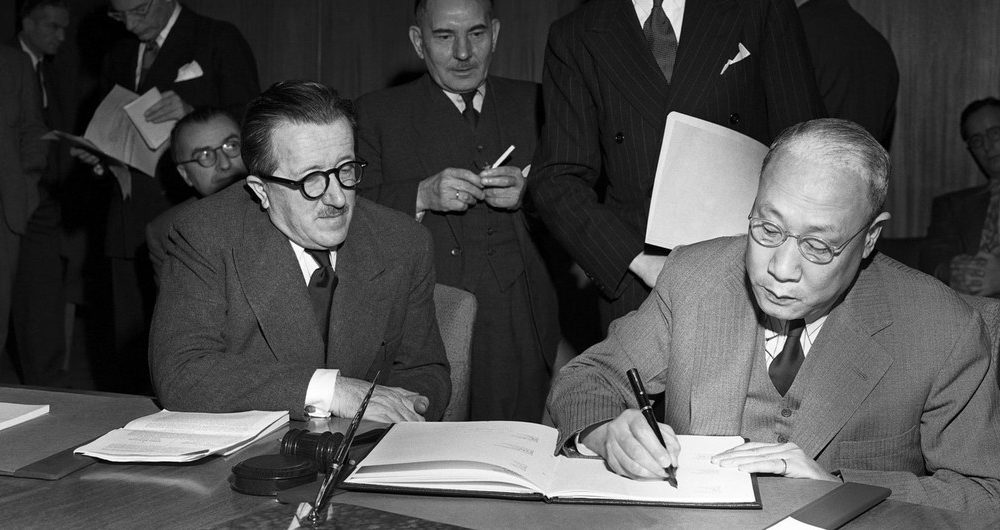 In commemorating the 70th anniversary of the landmark Geneva Conventions, the president of the United Nations Security Council hailed the “significant body of law”, describing it as playing “a vital role in limiting brutality of armed conflicts”.

In the aftermath of the Second World War, the treaty, comprised of four Conventions and three Additional Protocols, established the modern, international legal standards for humanitarian treatment during times of war. They were agreed on 12 August 1949, and with some exceptions, ratified by 196 countries around the world.

“As they are ratified and acceded by almost every State of the world, the principles and legal norms enshrined in these Conventions are also recognized as customary international humanitarian law [IHL] and are universally applicable”, said Poland’s Foreign Minister Jacek Czaputowicz, speaking for his nation which holds the Presidency of the Council for August. “This is a rare quality for any multilateral treaty”.

Among other things, the Conventions established protections for vulnerable groups in armed conflict, namely the wounded and sick; prisoners of war; and civilians, including civilians living under occupation.

Because Poland has been “painfully affected by consequences of other States’ failures to comply with international agreements” and in conjunction with its “sense of responsibility” to maintain international peace and security, Mr. Czaputowicz said that strengthening international law has always been important to his country.

“The greatest challenge to protecting human life in modem conflict is the observance of and respect for the existing rules by the armed forces and non-State armed groups”, he asserted. “If existing rules were followed, much of the human suffering in contemporary armed conflicts would not occur”.

“Artificial intelligence and autonomous weapon systems, such as military robots and cyber-weapons, reduce the role and control of human factors during wartime”, he continued. Moreover, the general rules of IHL prohibiting indiscriminate and inhumane weapons, “are being violated”.

Two IHL principles under the Geneva Conventions that deserve particular attention, according to Mr. Czaputowicz, are “the obligation to protect civilians, prisoners of war, the wounded and shipwrecked” as well as “limitations to the rights of parties to an armed conflict on how they conduct operations and on their choice of weapons”.

The increasing role of non-State actors and IHL legal loopholes are “the new reality of modem conflict”, he spelled out, bemoaning that they hinder international humanitarian law “in many ways”.

“International humanitarian principles are under pressure” and “the complexity of new challenges impedes the process of classification of conflict situations and makes it difficult to determine the exact rules that may be applied”, he elaborated.

According to UN Legal Counsel Miguel de Serpa Soares, the four Conventions are “at the core” of IHL.

Noting that the first three conventions “were by no means completely novel at the time”, he singled out the Fourth Convention as being “the first treaty that was specifically dedicated to the protection of civilian persons in time of war”.

Mr. Soares also drew attention to Article 3, the provision on basic rules governing the humane treatment of people not involved in hostilities, including soldiers who have laid down their arms, those wounded or in detention, as well as civilians.

Calling the inclusion of Article 3 “a historic moment for humanity”, he said it was the first instance in which non-international armed conflicts were regulated by a multilateral treaty. The significance is augmented by the fact that the Geneva Conventions are now universally adhered to.

Conventions show ‘what is possible’

For his part, Peter Maurer, President of the International Committee of the Red Cross (ICRC), maintained that the Geneva Conventions represent “one of the greatest achievements of inter-State cooperation” and “symbolize our enduring and common humanity”.

“The Conventions show us what is possible when States take collective and individual action to uphold the law and humanitarian principles”, he said.

Noting that “every single day” international humanitarian law is at work saving lives and protecting women, men and children in conflicts, he highlighted that while “we rightly hear about the violations because the consequences are tragic and visible”, we must also “recognize the protective power and positive impacts when IHL is respected”.

The ICRC chief painted a picture of IHL in action when the wounded and sick are evacuated to safety; the detained are treated with dignity; the fate of missing people is clarified, and humanitarian assistance is delivered across lines.

“The impacts of IHL are also shown through acts of restraint when horrors are not inflicted – civilian areas are spared from direct shelling, medical workers are able to freely operate without threat or targeting”, he added.

Continued violations do not mean the law is inadequate, but rather that efforts to ensure respect are inadequate, he flagged, urging “we can – and must – do more”.

The world must not forget that “the Geneva Conventions represent a line of our common humanity, and they shield us from our own barbarity”, underscored Mr. Maurer.