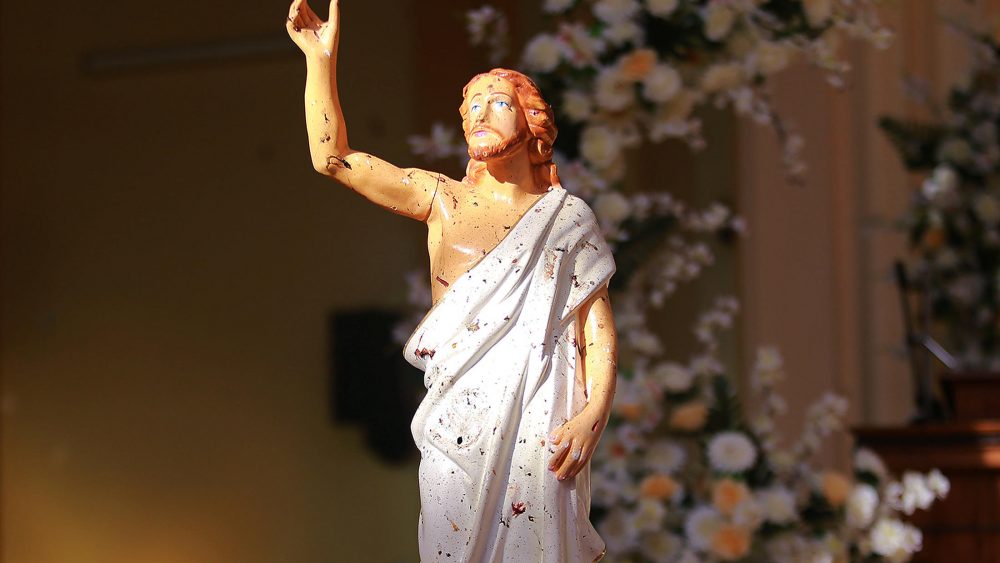 More than 200 have been killed and hundreds injured by a series of explosions inside churches and hotels in Sri Lanka, as Christians gathered for services to celebrate Easter. In a statement, UN chief António Guterres said he was “outraged by the terror attacks” and called for the perpetrators to be “swiftly brought to justice”.

According to news reports, three churches were targeted, in the cities of Batticaloa, Negombo, and the capital, Colombo. The Shangri-La, Kingsbury, Cinnamon Grand and another hotel, all in the capital, were also hit.

So far, no group has claimed responsibility for carrying out the likely suicide bombings, but police have reportedly arrested seven people in connection with the attacks.

The Secretary-General said in a statement that on what was “a sacred day for Christians around the world”, he recalled “the sanctity of all places of worship”.

The statement issued by his Spokesperson said the UN chief “expresses his deepest condolences to the families of the victims, the people and Government of Sri Lanka, and wishes a speedy recovery to the injured”.

Guterres commends Sri Lankan leadership, and ‘unity of the people’

In a tweet, the UN’s Resident Coordinator for the Indian Ocean island, Hanaa Singer, said the UN  “strongly condemns the horrific attacks carried out against civilians and worshippers…Heartfelt condolences to the families, victims, Government and people”. She also urged Sri Lankans to stand united” in the face of the carnage.

The President of the UN General Assembly, Maria Fernanda Espinosa, also expressed her “deep sadness” in a tweet, saying that her thoughts were with the people of Sri Lanka, “affected by yet another act of senseless violence”.

“We must unite in our common humanity to condemn these heinous acts and stop targetting innocent people, practicing their faith in peace”, she added.

Sir Lanka’s bloody 26-year civil war waged between Government forces and Tamil separatists in the north, ended in 2009 with the defeat of the rebels, and in the years since, there has been sporadic violence, some targeting religious minorities.

The island is home to around 1.5 million Christians, the vast majority Roman Catholic. The Singhalese majority are Buddhist – around 70 per cent of the population – with sizeable Hindu and Muslim minorites also.

In response to Sunday’s attacks, a national curfew has been put in place, and social media networks have reportedly been blocked.

Eye witness reports from St. Sebastian’s church in Negombo describe a scene of carnage, with dozens killed. There were also heavy casualties at St. Anthony’s in the Kochckicade district of Colombo, where the first blast detonated.

Pope Francis, in his Easter Address outside St. Peter’s in Rome, reportedly expressed his “affectionate closeness” for the Christian community in Sri Lanka which had been struck while gathering for one of its biggest celebrations of the year, and his thoughts to “all the victims of such cruel violence”

UN chief Guterres, concluded his statement reiterating the “supprt and solidarity of the United Nations, with the people and the Government of Sri Lanka, in this difficult moment for the nation.”