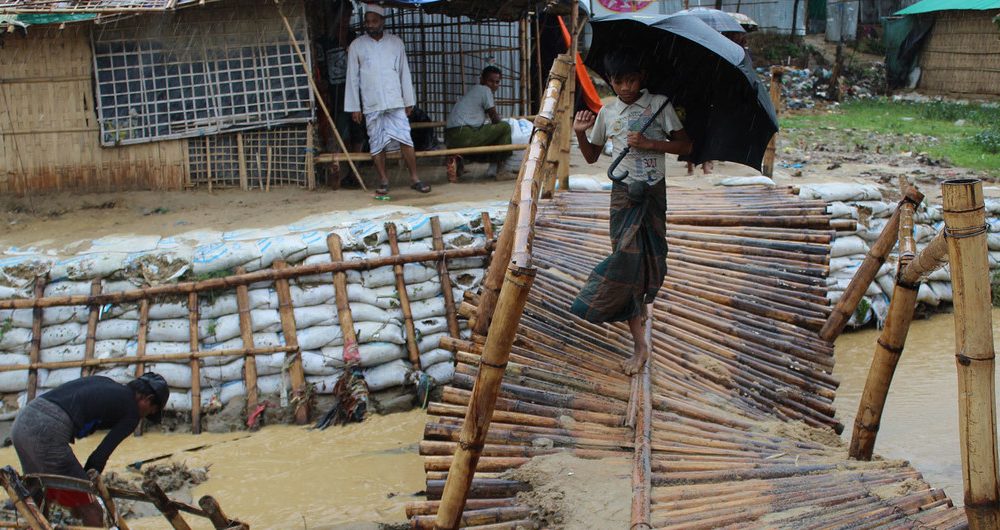 The continuing plight of nearly one million Rohingya refugees driven from their homes in Myanmar will be the focus of the United Nations Secretary-General António Guterres when he travels to Bangladesh this weekend – the country where they have found safe-haven.

According to UN spokesperson Stéphane Dujarric, the visit will also highlight the “generosity” of Bangladesh in hosting the refugees as well as the need for the international community “to do more.”

During the mission, the Secretary-General will be joined by Jim Yong Kim, the President of the World Bank Group. The two top officials are expected to meet with Bangladeshi Prime Minister Sheikh Hasina and other senior officials in the capital, Dhaka.

On Monday, they are due to travel to Cox’s Bazar to visit Rohingya refugee communities and humanitarian workers, and advocate for increased donor support.

‘One storm can wash us all away,’ refugees fear

The greatest threat that hundreds-of-thousands face on the ground today, is the ongoing monsoon season, with torrential rain that can cause flash-flooding, and the heightened risk of cyclones which accompany it. For refugees in makeshift dwellings, perched on unstable, flood and landslide-prone terrain, the risks are even higher.

“With the monsoon in full swing, it would take just one storm to wash us all away,” says 45-year-old Ayesha Begum, who lives with her two daughters and five sons whose shelter is in one of the precarious places most at risk of landslides.

“If there is a thunderstorm then the soil might get loose, anything could happen … I want a safer place, but I want to go to a place where there is a school for my son.”

Ms. Begum is on a list of 41,000 people deemed most vulnerable to floods and landslides within the Cox’s Bazar settlements, which sprawl across steep hillsides. At least 16,700 have been relocated.

‘Midwives save lives, it’s that simple’

In this complex humanitarian crisis, ensuring that pregnant women and their unborn children are protected from the myriad threats looming over them, is all the more pressing.

Midwives, trained by a UN Population Fund (UNFPA)-supported programme to care for pregnant and post-partum refugees, are saving lives.

“There’s a clear nexus here between increasing capacity to ensure safer pregnancy and childbirth for the most vulnerable women in Bangladesh itself and the ability to respond better to humanitarian needs, as with the Rohingya situation,” explains Rondi Anderson, a UNFPA midwifery specialist.

“Midwives save lives, it’s that simple.”

The evidence of this can be seen as women in labour, arrive at maternity centres in the camp, where they are provided with quality delivery services. A few hours later, the vast majority are cradling a healthy new-born girl or boy in their arms, in spite of the problems around them, says UNFPA.

On his mission, Mr. Guterres will also be accompanied by number of senior UN officials, including the High Commissioner for Refugees, Filippo Grandi, and the Executive Director of the UN Population Fund (UNFPA), Natalia Kanem.

“They will review the situation of the newly arrived Rohingyas in Bangladesh, and assess progress towards a safe, voluntary and dignified return of refugees in line with international standards,” added the UN Spokesman on Thursday.

Since late August 2017, widespread and systematic violence against Myanmar’s mainly-Muslim minority Rohingya, has forced hundreds of thousands to flee their homes in Rakhine state and seek refuge across the country’s border, in Bangladesh. Prior to that, well over 200,000 Rohingya refugees were sheltering in Bangladesh as a result of earlier displacements.

Even though the number of new arrivals has tapered off, and an agreement has been reached between the UN on the ground and the government, over establishing conditions in Myanmar to allow refugees’ voluntary and safe return, UN agencies there have reported that such conditions have not yet materialized.

As of 24 May, there are an estimated 905,000 refugees in Cox’s Bazar. To address the ongoing and increasing needs, the UN launched a Joint Response Plan in March, urging $951 million to provide life-saving assistance the refugees and host communities. However, the appeal remains only 18 per cent funded.

On Thursday, the World Bank announced close to half-a-billion dollars in grant-based support to help Bangladesh address the needs of Rohingya refugees in areas such as health, education, water and sanitation, disaster risk management, and social protection.

World Bank Group President Kim said that the grant will go a long way in helping the country support the refugees in their hour of need.

“We are deeply moved by the suffering of the Rohingya people and stand ready to help them until they can return home in a safe, voluntary, and dignified manner. At the same time, we are also continuing to support the Bangladeshi people and the host communities, who have shown great generosity by welcoming these refugees.”