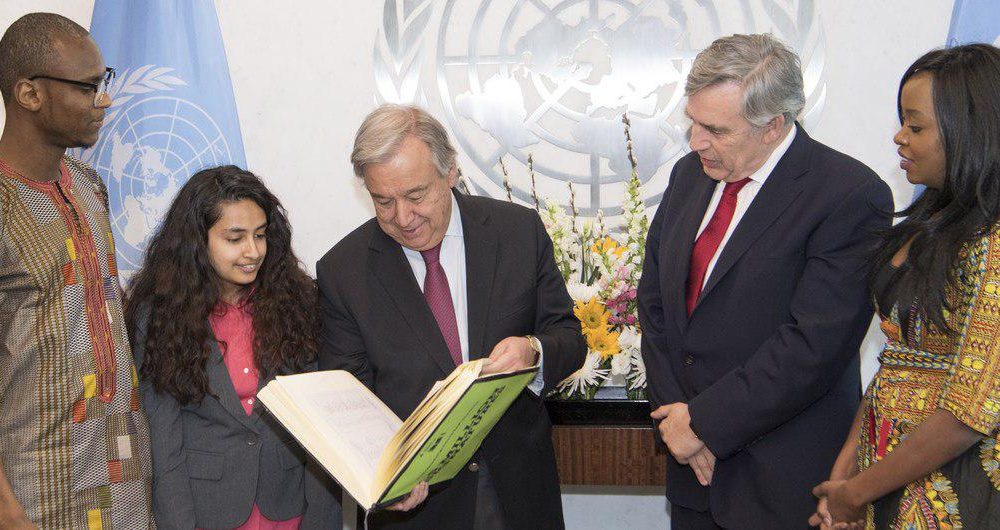 Three youth activists from India, Kenya and Sierra Leone on Friday delivered a petition signed by 1.5 million of their peers to the United Nations Secretary-General that calls for more investment in education.

The Global Youth Ambassadors, from the charity organization TheirWorld, were at UN Headquarters in New York in support of a funding plan launched by Gordon Brown, the UN Special Envoy for Global Education.

The $10 billion International Finance Facility for Education aims to get more than 260 million children into the classroom. It targets some of the world’s most marginalized youth and addresses issues which are denying them access to school, such as child labour, child marriage and discrimination against girls.

It also aims to help countries achieve Sustainable Development Goal (SDG) 4, which calls on governments to deliver equitable, quality education for all.

UN chief António Guterres thanked Mr. Brown and the youth representatives for the initiative, stressing that “a huge investment” is needed in global education.

Mr. Guterres, who had previously spent 10 years at the helm of the UN refugee agency, UNHCR, expressed concern that priority is not given to children’s education during humanitarian crises.

“I remember that in emergencies there is this mentality of ‘move the trucks, pitch the tents, find the water, distribute the food, find the vaccines’, but the question of putting the schools to work, finding teachers comes later,” he said, adding that “the amount of humanitarian funding dedicated to education was, and – I believe – still is, extremely reduced.”

The Secretary-General also highlighted future education needs, pointing out that one billion young people will enter the labour market in the next decade and the kind of jobs they will perform may differ from those available today.

“Education has to be able to address the needs of today, but education needs to prepare us for the future,” he said.