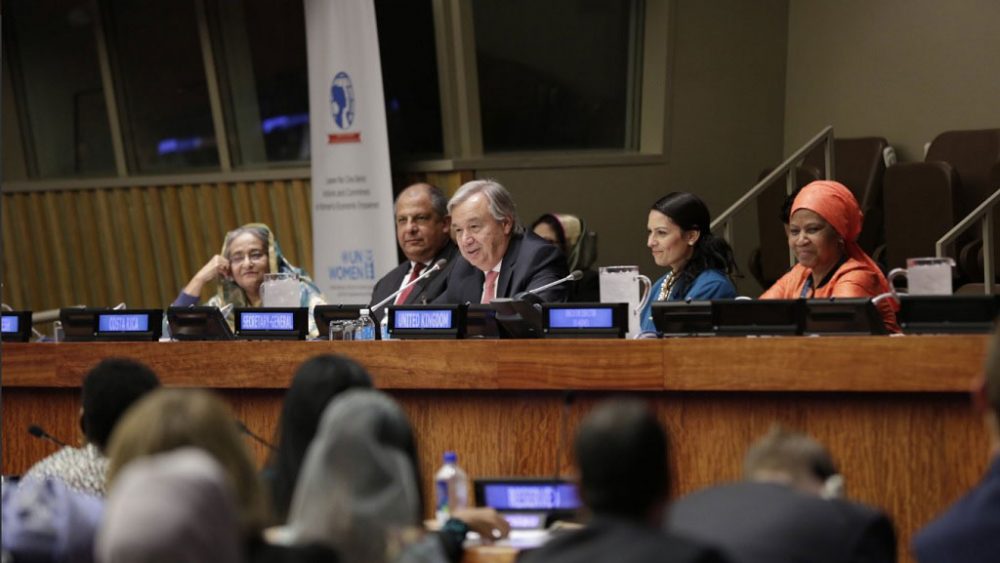 Extoling the benefits of women’s economic empowerment, both for economies as well as societies as a whole, United Nations Secretary-General António Guterres encouraged governments, the private sector, multilateral institutions and others to take measures to achieve the full and equal participation of women in the economy.

“Women’s economic empowerment contributes to more stable and resilient economies, and more peaceful societies,” Mr. Guterres said in his remarks to the meeting of the High-Level Panel on Women’s Economic Empowerment, held at UN Headquarters.

“It is also a necessary condition for achieving the Sustainable Development Goals,” he added, referring to the set of goals world leaders pledged to achieve by 2030 to end poverty, protect the planet, and ensure prosperity for all.

The event, entitled “Leave No One Behind: Actions and Commitments for Women’s Economic Empowerment,” was meant to take forward the recommendations made by the High-Level Panel in a report released in March of this year.

The report stressed that building women’s economic empowerment must be done in ways that leaves nobody behind, particularly the most marginalized women at the bottom of the pyramid. It also acknowledged that gender inequalities remain persistent across the world, but they can be overcome if barriers are removed.

In his remarks, Mr. Guterres noted that currently, only 50 per cent of women of working age are in the labour force – compared to 77 per cent of men. In addition, women tend to be concentrated also in informal and precarious employment, and they are paid on average 23 per cent less than men and carry out at least two and a half times more unpaid household and care work.

“This is not only detrimental to women, it represents a loss for society as a whole,” he told the gathering, which included the participation of Bangladeshi Prime Minister Sheikh Hasina, International Monetary Fund Managing Director Christine Lagarde and UN Women Executive Director Phumzile Mlambo-Ngcuka.

“Studies show that, if women were able to participate equally in the economy, global GDP could increase by 26 per cent – the equivalent of $12 trillion dollars – by 2025,” he went on to note.

Mr. Guterres called for translating the Panel’s guidance into actions that will bring results for women and girls.

“It is the time to take concrete measures to realize our shared vision of gender equality and women’s rights in the economy.”

Ms. Mlambo-Ngcuka highlighted some of the actions taken by UN Women to address the work of the Panel, including the launch of the Unstereotype Alliance, with 20 major companies that have the biggest marketing and advertising budgets in the world – from Unilever to Google, to AT&T to Procter & Gamble and Facebook.

“Their goal is to transform themselves so that they do not perpetuate stereotypes against women through their advertising and marketing,” she noted.

UN Women also launched a flagship programming initiative called, “Making Every Woman and Girl Count,” which focuses on data collection and ensuring that it can provide disaggregated data to track the implementation of the SDGs.

She also noted some of the areas where efforts need to be beefed-up, such as the need for more countries to ratify the ILO Convention on domestic workers, and addressing the rights of women with disabilities and those affected by conflict.