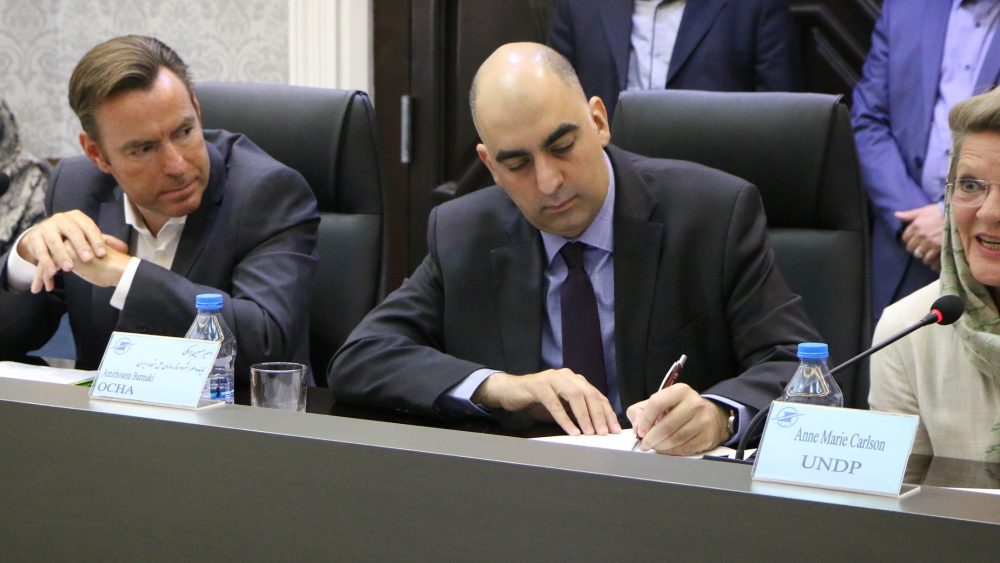 In the face of disaster, most airports look very much alike – chaotic.  The unprecedented flow of people and supplies combined with the overall burden of disaster, are more than many airports are equipped to handle.

Time is of the essence when a disaster strikes, and an effective, coordinated, rapid response is required.  Disaster preparedness measures and planning reduce the effects of these disasters, and airports preparedness, in particular, is vital to ensure relief goods and supplies reach those affected victims on time.

Get Airports Ready for Disaster (GARD) is an airport preparedness programme and a joint initiative between the United Nations Development Programme (UNDP) and Deutsche Post DHL Group (DPDHL).  GARD is a workshop-based training programme that prepares airports and trains the airport personnel in high risk countries for worst case scenarios.

In order to organize this training to be held Tehran in late 2017, a meeting was held on 27 August at Mehrabad Airport to discuss the plan of action.  The meeting was attended by Deputy Minister and Director General of Iran Airports Holding Company, Mr. Rahmatollah Mahabadi, CEO of Iran Air, Ms. Farzaneh Sharafbafi, Heads of different sections of the airport including the customs, police and security along with DHL Expert, Mr. Paul Dowling, UNOCHA Head of Office, Mr. Amir Hossein Barmaki and UNDP Resident Representative a.i., Ms. Anne Marie Sloth Carlsen.

Sharing his remarks, Mr. Mahabadi said: “Iran is prone to disasters and it ranks as one of the most disaster-prone countries in the world with floods, drought and earthquakes being the most frequent natural disasters.  Already, thousands of Iranians have, unfortunately, lost their lives to natural disasters.  In regards to Tehran, the probability to have an earthquake is quite high due to some major fault lines going across the city and thus we need to be prepared.  The partnership between, UNDP, UNOCHA, DPDHL and Iran Airports Holding Company demonstrates all partners’ willingness to prepare in advance to respond if, and when a disaster strikes.”

Ms. Carlsen also spoke at the meeting stating: “To date, around 800 representatives from more than 30 airports worldwide have participated in GARD workshops.  We are very pleased that Iran will also participate and prepare its airport personnel to respond to potential disasters.  UNDP stands ready to work alongside the Iran Airports Holding Company to organize this training to take place in Autumn 2017 in Tehran.”

She added: “When disaster strikes, as citizens, we expect officials to handle the situation in the best way possible.  Thus, this training and our cooperation is extremely crucial.”

During the meeting, Mr. Dowling made reference to the fact that, GARD was initiated as a result of the Bam Earthquake which occurred in 2003.  To better overcome such challenges in the future, he said: “It is necessary that personnel from all different sections in the airport stand next to each other and are coordinated.  During the GARD workshop, participants develop concrete action plans which are then implemented by airport staff and disaster management authorities.