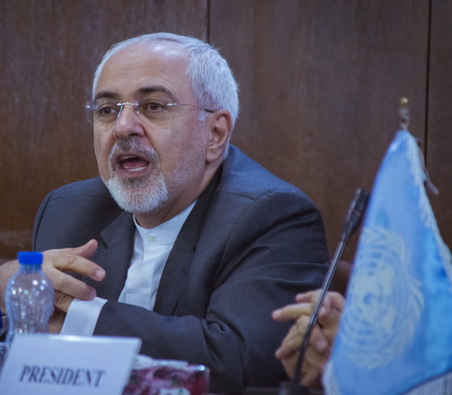 The theme of the UN Security Council simulation was North Korean nuclear programme.  Addressing the inauguration ceremony, Dr. Zarif shared with youth his memories from the time when he wasserving in the Iranian Mission to the UN.

He also said that during the MUN students could question the roles, traditionally played by big powers. “For instance, on the question of North Korea, the traditional powers namely China and the United States play the major role because they enjoy military power at their disposal and you will see this power element in your negotiations during the MUN,” he said.

The Foreign Minister pointed out that in these days there are other elements of power such as consensus building efforts which is now more often used in the Security Council.   He also highlighted the crucial role of dialogue between the countries.

He suggested that the students who represent non-permanent members of the Security Council in the MUN practice the following tools as well: thought and dialogue building.

He said that these tools are very important in power building issue and by using them the international condition can be changed. “We must know that the UN Security Council resolutions are not everything, but at the same time they are not useless papers,” the Minister said.

She also reminded the audience about recent peaceful initiative of Iran, World Against Violence and Extremism (WAVE) suggested by President Hassan Rouhani, which was adopted by the UN Members States as the General Assembly Resolution.

“Today, the popularity of Model UN continues to grow. It is estimated that the number of participants exceeds 500,000 students – worldwide– every year – at all educational levels – from primary school to university,” UNIC Director said.

She pointed out that indeed, many of today’s world leaders in government, business and the arts have – in the past – participated in Model UN as students.

Dotsenko told the participants that they have unique opportunity to learn more about peace and security, how UN Security Council functions and improve their skills in diplomatic negotiation, communication and consensus-building.

More than 50 university professors and students from across Iran attended the 6ht MUN Security Council.   UNIC distributed its promotional materials during the event.